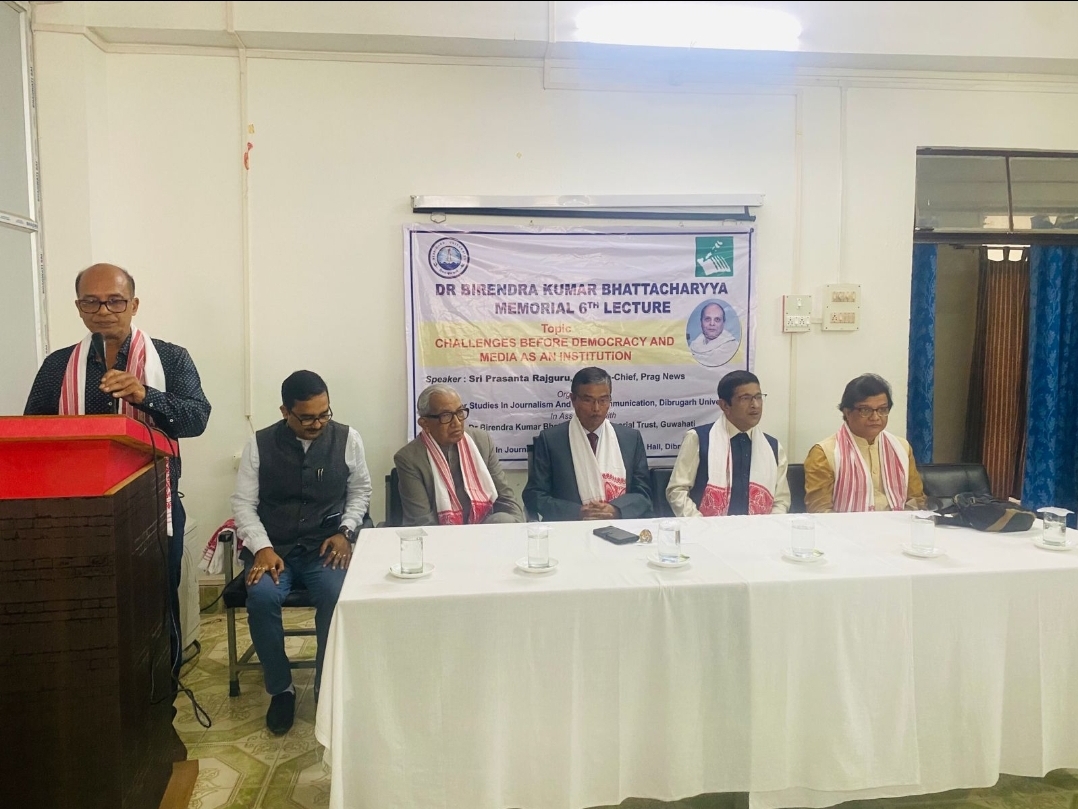 On the occasion of the event, Prof. P.K. Gogoi, Chairperson, CSJMC, Dibrugarh University said, “Dr. Birendra Kumar Bhattacharya was one of the pioneers of modern Assamese literature. We at CSJMC are extremely happy that, as in the past, we received the opportunity to organise the memorial lecture this year as well on the 98th birth anniversary of this great litterateur who is renowned for his very crucial torch-bearer’s role in discovering, nurturing and promoting young literary talents in Assam, during his lifetime. Through this event, we hope to carry forward his philosophy and his works.”

While explaining the objectives of the memorial lecture, Dr. Dipankar Bhattacharyya said, “The aim of this memorial lecture is to introduce the new generation to the literary works and thought processes of Dr. Birendra Kumar Bhattacharyya as well as provide an engagement platform for the students with eminent journalists so that they could learn new things and move forward in the direction of journalism. We are extremely thankful to Dibrugarh University for organising these lectures. We also would like to thank Oil India Limited who have sponsored us all these years.”

Prof. Jiten Hazarika, Vice Chancellor, Dibrugarh University, said, “Dr. Bhattacharyya was a national figure. He started his career as a journalist as well as a teacher in a university. He became a professional journalist in a very short span of time. However, in Assam, we have known him as a writer and his popularity began only after the release of his two novels Mrityunjay and Iyaruingam. It is because there is a practice or a mal-practice in the Assamese society where we recognise talents only after one is awarded a prize. There is a need for change in this trend and all people’s hard work should be recognised.”

Prof. Nagen Saikia, in his speech as a guest of honour, said, “Dr. Birendra Kr. Bhattacharyya, I had the opportunity to know him very closely. I realised that the person and the writer that he was, there was no difference between the two. He was a deeply humanitarian writer and intensely recognised his responsibilities towards the society.”

In his memorial lecture, Prasanta Rajguru said that he was introduced to Dr. Bhattacharyya through a story published in the magazine Prantik. He said that the period when Dr. Bhattacharyya was working as the Editor of Ramdhenu, was a golden period. In his speech, he talked about the beginnings of Democracy in Europe, the progress of the media as well as the narrative of the Indian media. While talking about the theme of the lecture today, Rajguru said that democracy, mass media and capital go parallelly. He stressed on the need for changes within the society in order to see changes in mass media.”

The event ended with a vote of thanks from the organizers.