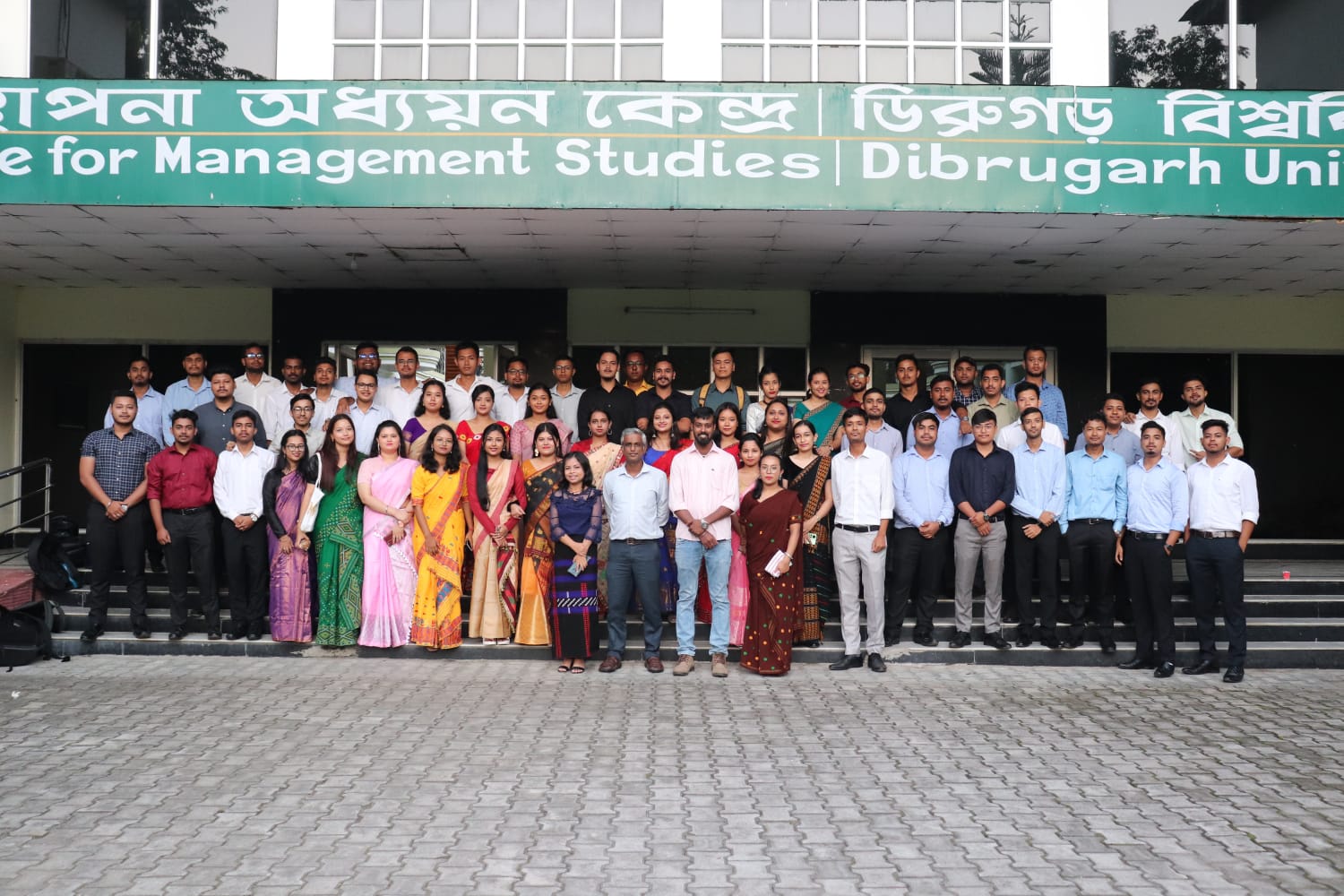 The 2022 Edition of Rhapsody was organized on October 15, 2022 by the 2022 MBA (FT) Batch as part of their course requirements at Centre for Management Studies, Dibrugarh University. It was the tenth edition of the event having been started in 2013. The theme was Network Marketing: Post-Pandemic Revolution of App-Based Marketing with Mr. Sandeep Raj Tamuli being the resource person. He is the co-founder and CEO of Sugaree, a food delivery app. He is also the co-founder and CEO of Surface 3D. He is an alumnus of Dibrugarh University Institute of Engineering and Technology (DUIET) from where he did his BTech in Mechanical Engineering. He went on to do his MTech from IIT, Bombay, also in Mechanical Engineering. The programme started with opening remarks, introduction of the resource person, lighting of the ceremonial lamp and the rendering of the University Anthem by the students. Mr. Tamuli was warmly welcomed to the Centre through a brief felicitation where he was presented with an Assamese Gamocha, the Centre’s Memento and a plant.

The resource person, Mr. Tamuli during the lpcourse of his talk gave a very detailed overview of his food delivery app by elaborating on the various stages the app went through from conception till deployment. He started by saying that his first attempt at having a food delivery app failed miserably but he identified the reasons for his failure including the technology aspects and re-launched the app again in November 2021. He mentioned that the real challenge in having an app that drives a business is third party technology integration like payment gateways and that there is still a dearth of good developers in the state who understands the nuances of technology integration. He talked about the various strategies he adopted to take on established players in the market like Zomato and Swiggy and also about his revenue model and the HR policies. He also dwelt on why many local players in the food delivery app business could not take on these established players and had to shut down. Mr. Tamuli informed that currently he is operating in Upper Assam but by next year, he plans to be present throughout Assam and thereafter have a pan India presence. He also discussed about the formalities of having a startup and how one can take advantage of various schemes of the Government to be successful. He winded his talk by giving a live demonstration of the various features of the Sugaree app. After the live demonstration, there was a very good interaction with the audience which comprised of mainly the students. Mr. Tamuli answered various questions on his app, the technology as well as the business model. He also shared some interesting incidents to highlight unforeseen circumstances and how best he tried to handle them during the course of the interaction.

Dr. Himadri Barman who is the course instructor of the core course, Computer Applications in Management under which Rhapsody is organized as a course completion requirement gave the concluding remarks. He commended the students for organizing Rhapsody 2022 with an interesting techno-management topic and for inviting Mr. Sandeep Raj Tamuli as the resource person. He hoped that the students greatly benefitted from the talk and they would be motivated to go for startups. He said that today no business can survive without technology and its adoption in business is crucial. Rhapsody ended with a Vote of Thanks and the singing of the national anthem. The entire programme was streamed live over the official Facebook page of the Centre.