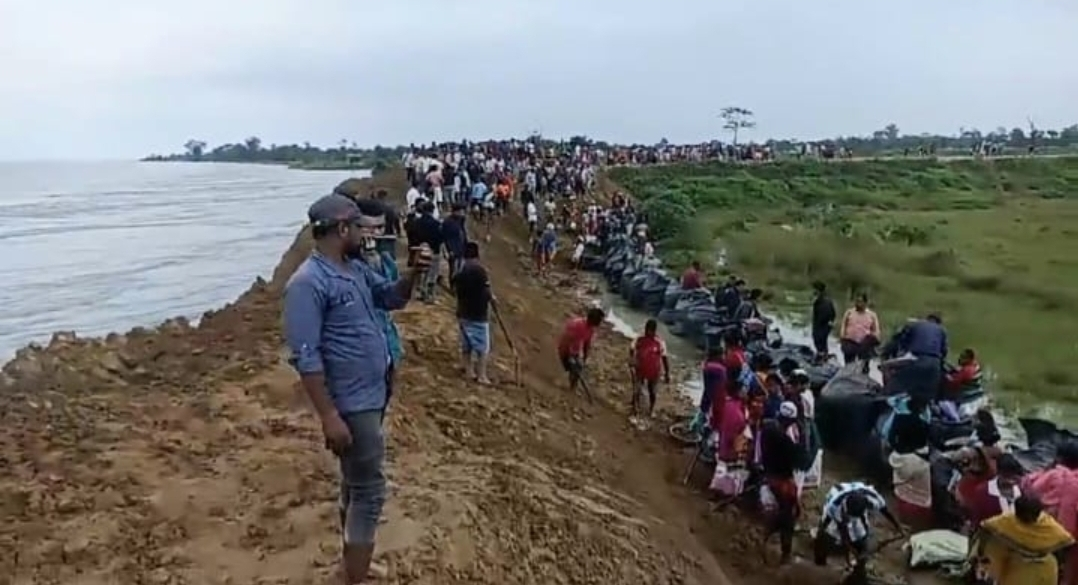 by our guest editor, Rajib Dutta

Heavy and relentless erosion by the Brahmaputra river washed away a major portion of an embankment in Maijan area on the outskirts of Dibrugarh on Tuesday posing a major threat to the 180-year-old historic town. The swelling river eroded a major portion of the Brahmaputra dyke in Nagaghuli-Maijan area causing panic and terror among the people of the area. According to locals, the river was flowing 150 metres away from the river embankment just two days ago. In wake of the emergency situation, the district administration sought the help of workers of nearby Maijan and Greenwood tea estates to repair the embankment.

Almost 500 tea garden workers volunteered for the restoration work which is being taken on a war-footing. With the strong river current constantly hitting the embankment in full force, locals fear that it is only a matter of time before the whole embankment is washed away.

“Our first priority is to save the embankment. Already a major portion of the embankment has been washed away by the river. It is a very dangerous situation. If the river manage to breach the entire embankment, all nearby areas including the Assam Medical College and Hospital, the Dibrugarh Airport will come under water. The next threat will be Dibrugarh town. The protection measures have not been successful so far. We are trying to stem the erosion by placing mega geo-fibre bags in the foot of the embankment but since the water level is 12-metre deep the bags are being washed away. The water has to dry up first”

Dibrugarh DC Biswajit Pegu said, “Both men and machine has been engaged in the area to control the erosion. The erosion has been caused due to changing course of the Brahmaputra. Earlier the river current use to hit Dibrugarh’s Rohmoria area causing massive erosion. This time due to changing course of the river, the Nagaghuli and Maijan area have face the brunt of erosion. We are doing everything possible to deal with the situation.”

It may be mentioned that the great earthquake of 1950 measuring 8.7 on the Richter scale changed the course of the Brahmaputra besides lifting the river bed. The bed level of the Brahmaputra which flows besides Dibrugarh town lies several metres above the ground level of the town. For a large portion of the year the river flows at a higher level than the town. In case the Dibrugarh town protection dyke is breached by the river, the entire town will be under water within minutes. It may be recalled that during the great flood of 1988 the town was saved by a few centimeters as the Brahmaputra almost breached the embankment.