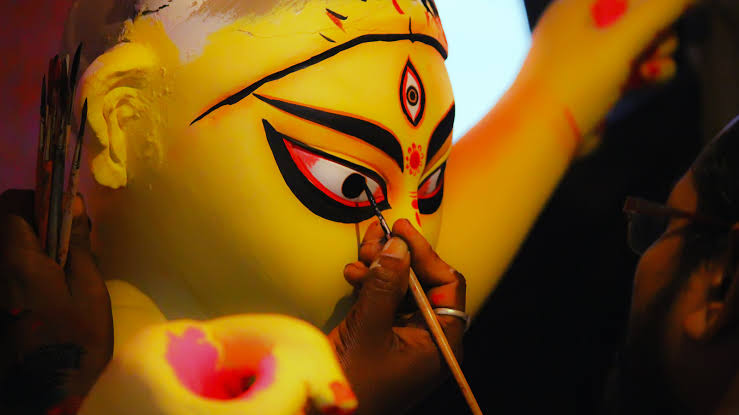 Mahalaya an auspicious occasion observed seven days before Durga Puja begins. We throw some light on the significance and celebration of this festival.

Mahalaya marks the beginning of the ‘Devi-Paksha’ and the end of the ‘Pitri-Paksha’ (the Shradh or the mourning period). It is said that Goddess Durga starts her journey towards earth (to her paternal home) on the day of Mahalaya, that is, on the first day of the ‘Devi-Paksha’. Since Goddess Durga is traditionally worshipped at spring-time, this Sharadiya (autumnal) festival is also known as Akaalbodhan (untimely invoking of the Goddess).

Mahalaya is an invitation to ‘Mahishasura Mardini’ Goddess Durga, by chanting various hymns like ‘Jago Tumi Jago’ and ‘Bajlo tomar alor benu’. In 1930s, Mahalaya was first broadcast over the radio. Later, it was recorded and played during the wee hours of the day in the voice of Birendra Krishna Bhadra. Every traditional Bengali household is familiar with his enchanting voice that fills the pre-dawn hours of Mahalaya.

This is also a day of remembrance for the Hindus. The ritual of Torpon (offerings) is performed. People throng to the banks of River Ganga, clad in dhotis, to offer prayers to their deceased forefathers and perform pind-daan.

The traditional six-day countdown to Mahasaptami starts from Mahalaya.