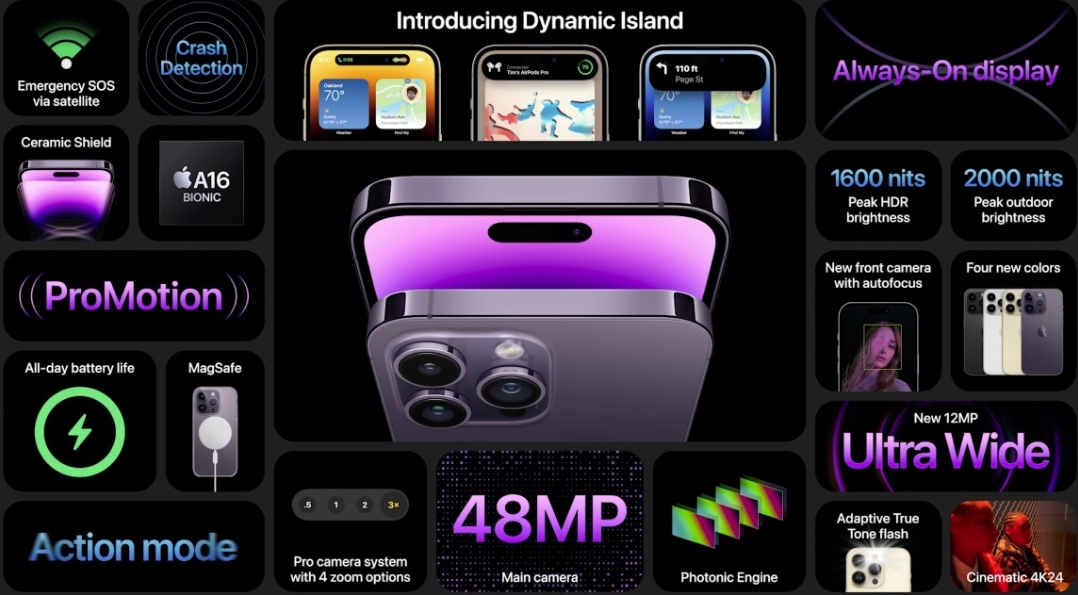 Apple unveiled a set of new products at the launch event – the first physical launch event in two years. In a 90-minute presentation, Apple detailed a series of product updates, including the iPhone 14 and iPhone 14 Pro models, the new Apple Watch 8 and two other additions to its smartwatch lineup and the updated AirPods Pro 2 along with the new iOS 16. This new set of products has upgraded features like improved cameras, satellite connectivity capabilities, and better battery life.

iPhone 14 and iPhone 14 Plus
The iPhone 14 has a 6.1-inch screen, and the Plus is 6.7 inches. These models are the first not to have a SIM card tray and will use the eSIM Card needed to connect to a mobile network with digital software.

Another feature is the ability to employ satellite networks in an emergency to communicate. This feature will help the users to send Pre-defined messages to the emergency services in a remote areas. These phones will have a new app that will instruct the user to find a way to get the best signal for the device. The launch date of these models is on 16 September. iPhone 14 to cost around ₹79,900 while 14 Plus (6.7″) will cost around ₹89,900 in India.

The new iPhone 14 Pro model has a unique design. It has a Pill shape cut-out called Dynamic Island, where the top camera and microphone are eliminated near the top of the screen. And a new software interface is added for controlling music playback and other apps. They come in four colors: Deep Purple, Gold, Silver, and Space Black.

Apple Watch Series 8 has a feature to track temperature. These features can track the women who are ovulating on the device. The temperature sensor is said to be accurate to 0.1 degrees Celsius. The internal gyroscope in the device will help in detecting car crashes. These are two new features in the device with the previously added features.

Apple spokesman Jeff Williams said, “The device is designed for some of the most extreme environments”. The screen display is larger than the other apple watch and has a 49mm titanium case and an action button for a quick response. The battery life is up to 60 hours with a water-resistant feature of up to 100m.

Further features include a brighter display, a new depth gauge for scuba divers named Oceanic Plus, an 8dB warning siren that can be audible from distances of 180 meters, and a red-light night-time display. Apple Watch Ultra: ₹89,900

The new model will be available in midnight, silver, and starlight colors. The screen display is 30pc larger and 20pc faster.
Apple Watch SE: ₹29,900

AirPods Pro is the latest version of the earphones. These come with a feature called “adaptive transparency”, which reduces external noise from surroundings. The battery life of these AirPods has increased up to six hours, and the charging case will emit a blip noise, which will help the users to find their lost device.You’ll have to shell out ₹26,900 to get one.