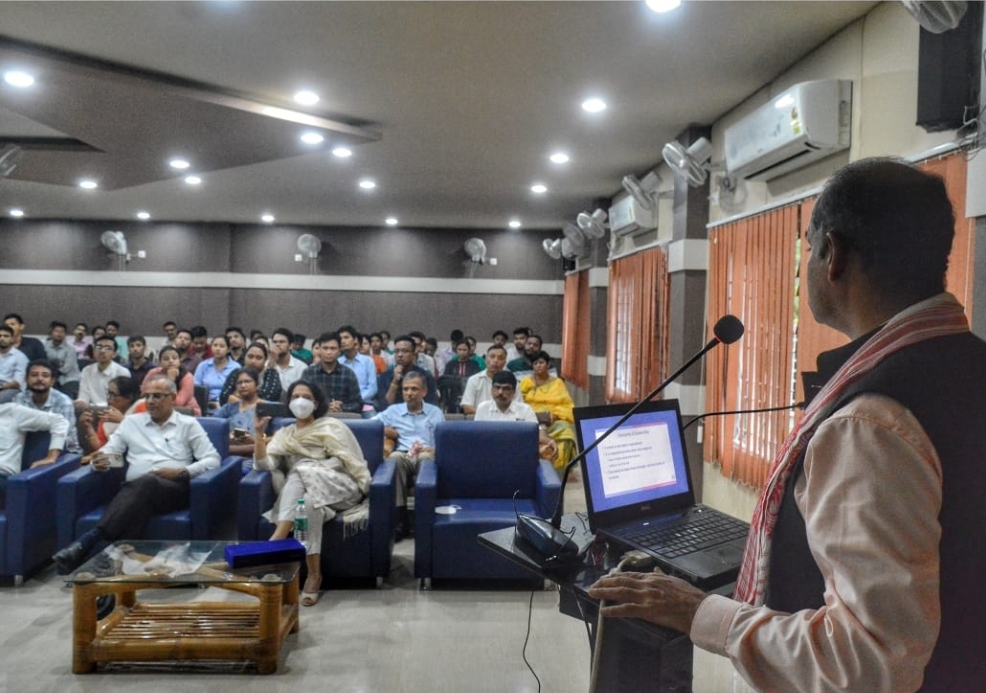 UniversityThe Centre successfully organized a talk on “Leadership in the Post Pandemic Era : Time to Look Beyond” the Traditional Ideas of Leadership” by Prof. B Mahadevan from IIM, Bangalore on September 2, 2022. Prof. Mahadevan is a well-known figure in the field of management education of India and has worked as a consultant with many companies in India and abroad. He is considered an authority on the Sanskrit language and the management aspects of the Indian scriptures. He has recently written a book titled Introduction to Indian Knowledge System – Concepts and Applications with two of his co-authors. The talk was organized with support from the Surajmal Jalan Charitable (SJC) Trust, Dibrugarh in the memory of Late Mahadeo Jalan, a well-known tea planter and philanthropist of Dibrugarh who left for his heavenly abode on 23 July, 2021. The lively one and half hour talk from Prof. Mahadevan dwelt on the failure of current leadership models mainly based on western management thought in the context of the Covid-19 pandemic. He said that we need to look into India’s past civilization and derive lessons on leadership from our ancient scriptures which have solutions to our current leadership crisis. He said that India did a remarkable job in fighting the pandemic and the nation’s ability to fight a crisis was proved again. He highlighted the importance of inspiration in leadership and said that leadership starts from the self and is dependent on understanding the self, manging the self and inspiring the self. This can bring in self transformation to inspire others, lead and deliver. He gave anecdotes from his own life experience to supplement his talk. His talk was followed by an interaction with the audience present, especially the students.

Earlier, Prof. Kumud Chandra Goswami, Chairperson of the Centre gave the welcome address and thanked the trustees of the SJC Trust for their endeavour and inviting a person of the stature of Prof. Mahadevan for the talk. Mr. Manoj Jalan, trustee of the SJC Trust and a member of the Board of Management of the Centre in his speech explained the genesis of the talk and the importance of leadership. He also thanked Prof. B Mahadevan for agreeing to be a part of the talk and for his presence in spite of a busy schedule. He hoped for his continuous support in the future also. The Vote of Thanks was given by Mr. Pransu Raj Kaushik, Assistant Professor of the Centre. He also hosted the event. Prof. Mahadevan was accorded a warm felicitation by both the Centre as well as the SJC Trust. Mr. Manoj Jalan and Mr. Saumendra Kumar Barua, former MD of Numaligarh Refinery who was present in the talk were also felicitated. The talk was attended by the students and teachers of the Centre, other teachers from the University as well as some leading citizens of Dibrugarh and Mr. Bijaya Kr. Mishra, DRM of Tinsukia Division, Indian Railways.