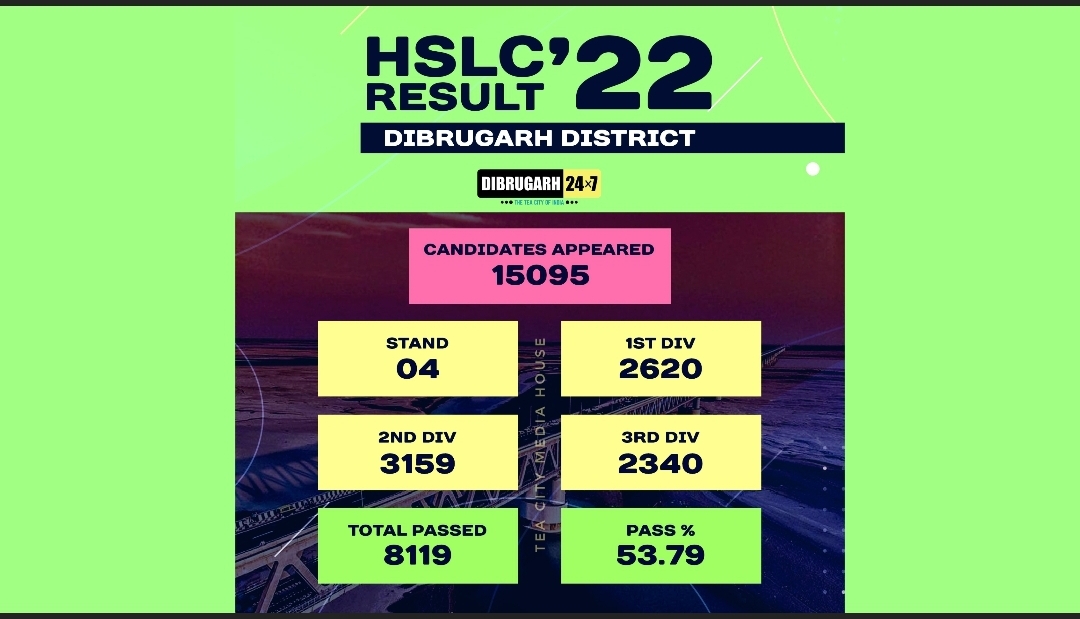 The Assam HSLC Results, 2022 were declared earlier today. The examination, which is widely considered to be the first major hurdle to one’s career, besides being a popular benchmark of a student’s calibre and quality, hasn’t lost its sheen and significance till today. The palpable anticipation and anxiety with which the students and their family members await the results of this examination is a living testament to that!

This year, talking specifically of the Dibrugarh district, a total of 15095 students had appeared for the examination. Among those candidates, 8119 have managed to cross the symbolic barrier. While four students from 4 different schools have stood out and brought laurels to the district by securing ranks within Assam, as many as 2620 candidates have secured 1st division. At the same time, 3159 have attained 2nd division, and 2340 candidates managed to secure 3rd division. The pass percentage of the Dibrugarh district stands at 53.79.

Among the State Rank Holders from Dibrugarh, the first on the list is Labeeb Muzib, a student of the iconic and well-known Don Bosco Higher Secondary School of Dibrugarh, who secured the 3rd rank. Don Bosco School, Dibrugarh has an illustrious history of producing quality and top-notch students, and this performance just adds another feather to its much adorned hat.

Next in this elite list is Dhritishman Dutta, who secured the 9th position among all the students of the State appearing in the examination. Dutta, who has well exhibited his class and calibre through his results, is a student of the Salt Brook School of Dibrugarh, another well-known English-medium school of the town known for its dedication and commitment to promoting quality education.

Likewise, living up to its longstanding reputation of being at the vanguard of female education in Dibrugarh, the much celebrated Little Flower Higher Secondary School once again contributed to the list of State Rank Holders, as its student named Ananya Bharadwaj secured the 10th position in Assam.

Moreover, in a rare but heartwarming feat and in what will profoundly inspire many others to follow suit, Anikankana Gogoi, a student of the lesser-known Tengakhat Jatiya Vidyalaya also secured the 10th position. Her extraordinary achievement, despite being from a remote area laden with its own share of problems, proves that hard work and dedication can take one to the pinnacle of success and glory, notwithstanding one’s geographical origins. If sources are to be believed, her incredible result also makes her the first rank holder ever of the Tengakhat sub-division.